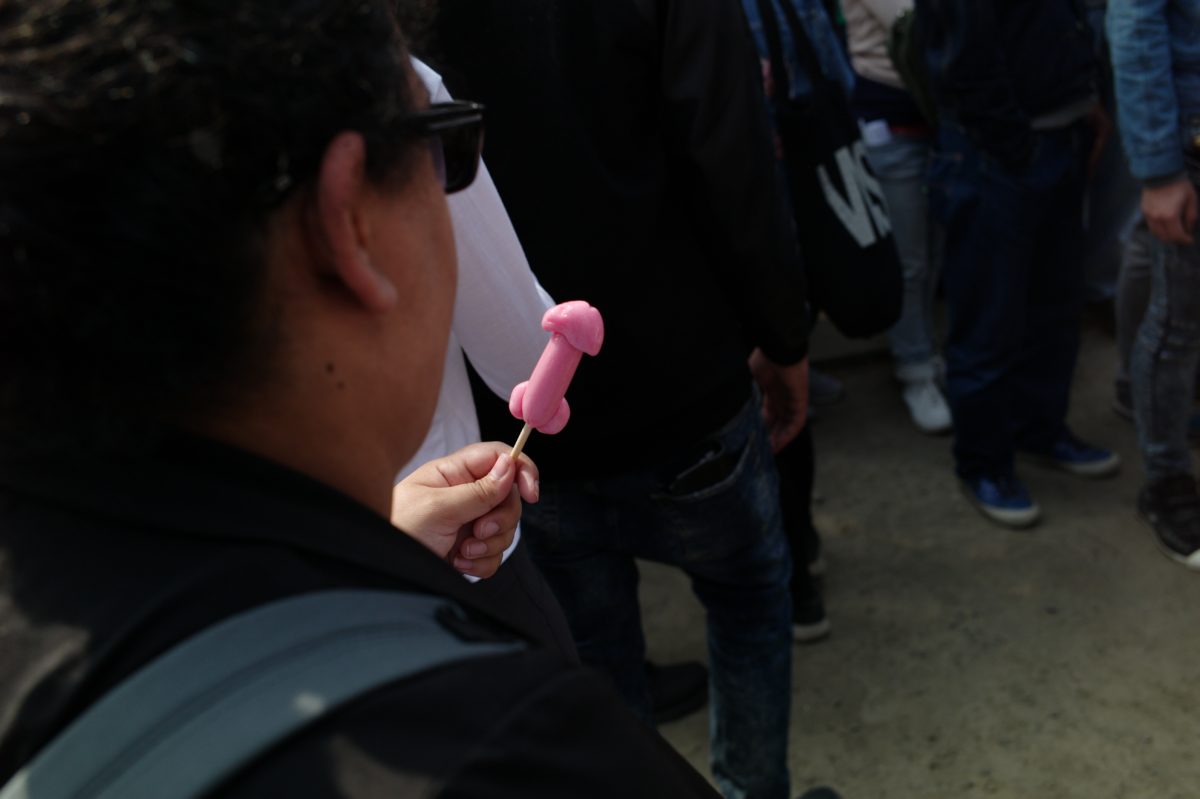 On Sunday, I decided to go to one of Japan’s most famously controversial festivals, the Kanamara Matsuri in Kawasaki. The area was completely packed with foreign faces looking to participate, and to deep throat phallus-shaped lollipops. The first thing that struck me was how small the actual shrine, and  festival area was. Since it’s such a well-known festival, I assumed that the shrine would be a bit… bigger?

This festival is clearly much more popular with foreigners than it is with Japanese people. Most of the Japanese people I saw there were really just looking to avoid the crowd on their way home or to work. Speaking of which, while there I heard at least six different stories on the festival’s origin. I was approached by a very camp gentleman who told me that the festival is one of the last remaining festivals in Japan that was dedicated to genital worship. He had a very strange look in his eyes when he told me this. One of the people I went with, googled a story about a woman whose snatch was supposedly haunted by a demon who at the penis of any man who tried to sleep with her, so she got a blacksmith to make a steel dildo, and then she tricked the demon into biting it and breaking his (?) teeth off. The item fashioned by the blacksmith is supposedly kept somewhere on the grounds of the shrine. I also heard that the area near the shrine in Kawasaki was a red light district in the past, and prostitutes would go there to pray for safety and health while working.

There are actually a few festivals in Japan like this, and most of them are in Spring, and they are usually festivals for fertility and a bountiful harvest. For instance, the Honen Matsuri held in Komaki (near Nagoya) is one that is quite famous in that region, and it is also held in Spring (March 15th). This one seems to be purely dedicated to fertility and harvest though, making it markedly different from the Kanamara festival.

Regardless of what I heard and expected before going, I definitely left with more questions than I came with. Like why was the pink penis so much bigger than the black one? Why were transgender people only allowed to carry the pink one? Speaking of men dressed as women, there was a guy dressed as the video game character Hatsune Miku who was hilariously directing traffic, without being asked to, along with 5-6 other uniformed security guards. Check out our Instagram highlights to see him in action. How did this festival become so popular with foreigners? Having asked that last question, it is interesting that this would be the festival that foreigners would flock to. I think that the non-Japanese people may have even dictated the vibe of the festival to a degree.

Well, I can safely say that I have the answers to a few of the questions on my list. First, let’s talk about the large pink phallus that was being paraded around along with the smaller black one. It apparently has a name, “Elizabeth”. Elizabeth was donated to the Kanayama shrine by a new-half (a waseieigo word that means ‘transgender’) club called Elizabeth Kaikan. When it was first donated, supposedly only members of that club could carry Elizabeth in the parade, however non-members can now carry the large pink phallus throughout the streets so long as they dress as the opposite sex. Seems pretty simple, right? Wrong! This is a very progressive move, as Japan is a pretty conservative country overall, and although on the surface this may seem as just a fun way to carry the penis through the streets, what it really does is gives people who are transgender an opportunity to openly participate in the festivities (like the gentlemen who was dressed as Hatsune Miku).

This has made this festival wildly popular with the LGBTQ community within Japan, and also imbuing the festival and shrine by proxy with a political message.